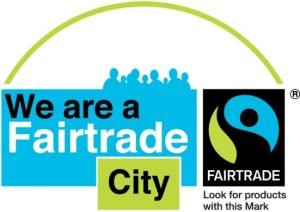 Peterborough has been awarded Fairtrade status for its commitment to Fairtrade principles, following an 8-year campaign.

Peterborough is now officially a Fairtrade City, after its 2011 resolution to actively promote Fairtrade to consumers, businesses and community groups in the area.

As part of the campaign, retailers have pledged to sell more than four Fairtrade products and eateries have committed to serving Fairtrade tea and coffee. The campaign also secured support from faith groups, schools and businesses throughout the city to promote the Fairtrade message in their working practices. The campaign has involved over 40 events spreading awareness of Fairtrade; this has included organising two primary school Fairtrade conferences. In 2014, Foncho, a Fairtrade banana grower from Colombia; visited the city to meet students at the primary school conference.

A spokesperson for the Fairtrade Peterborough group said: “It’s been an exciting journey to achieve Fairtrade City status for Peterborough, we could not have done it without the fantastic support, dedication and enthusiasm received from local businesses, schools, places of worship and the people of Peterborough.”

Adam Gardner, Acting Head of Campaigns at the Fairtrade Foundation, said: “We are delighted to welcome Peterborough to the Fairtrade movement which now boasts more than 2,000 communities worldwide, taking practical steps to making a fairer world trade system a reality.

“Thanks to the support of the public and campaigners, an increasing number of farmers in developing countries are now selling their products on Fairtrade terms, bringing them a stable income, and the chance to trade their way out of poverty.

“Today, more than 1.6 million farmers and workers across 74 developing countries benefit from the international Fairtrade system, but there is still a long way to go.”

To celebrate the achievement, a special Fairtrade Evensong will take place on Wednesday 13 November, 5.30pm at Peterborough Cathedral, attended by the Mayor of Peterborough and Gillian Beasley, Chief Executive of Peterborough City Council. The event is open to all.

“This is such an exciting achievement for the city, and one that really shows the dedication and hard work of everyone who has contributed towards making this accolade possible,” explains Karen Igho, Health and Wellbeing Lead at PECT, and Fairtrade Steering Group member. “Peterborough and its residents can be proud to have earned this status.”

Fairtrade helps small-scale farmers ensure they earn decent incomes and have long-term contracts with companies. In addition, they earn the Fairtrade Premium, which they invest in vital business, social and environmental projects.

Towns, cities, boroughs, villages, islands, counties and zones can apply for the Fairtrade Town status and join the movement towards a fairer world trade system. An area that applies for Fairtrade status must meet five criteria:

• Local council passes a resolution supporting Fairtrade, and agrees to serve Fairtrade tea and coffee Fairtrade at its meetings and canteens.
• At least four Fairtrade products can be purchased in the area’s local shops and eateries.
• Fairtrade is effectively promoted to local businesses and community organisations.
• Attracting media coverage and popular support for the campaign.
• A local Steering Group must be established to ensure continued commitment to its Fairtrade Town status.

The FAIRTRADE Mark independently certifies that products meet economic, social and environmental standards. As such, it is the most widely recognised ethical mark worldwide.

For more information about the FAIRTRADE Mark and how to apply for Fairtrade status, visit www.fairtrade.org.uk.

Find out more about the campaign in Peterborough by visiting www.fairtradepeterborough.org.uk or via social media channels.